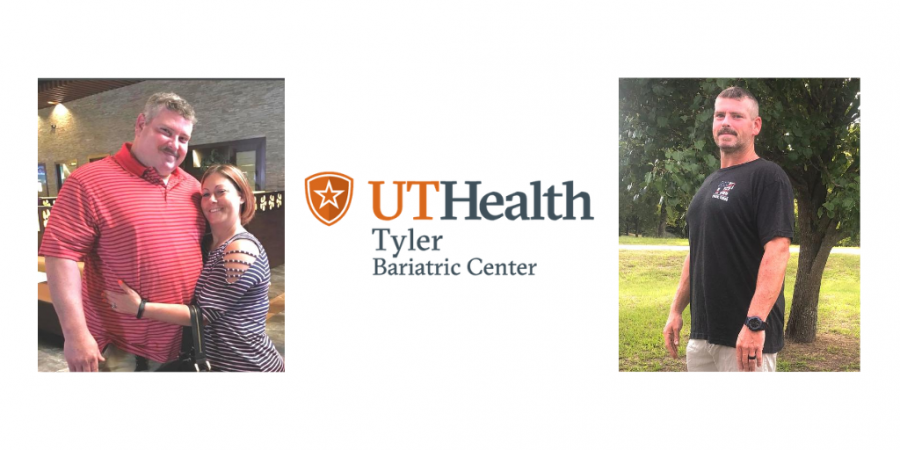 At nearly 400 pounds and a 48-inch waist, Shaun Rivers was ashamed to be seen in public and didn’t want to leave his house. All he wanted was to improve his health and knew it was time for a change. Today, he is down to 201 pounds and a 34-inch waist.

Rivers’ journey to better health started eight years ago when he found out he had stage 4 Graves’ disease, an autoimmune disease that attacks the thyroid. To treat it, he took a medication that stopped his metabolism. At the time, he was about 240 pounds. Within 10 months, he weighed 393 pounds.

“I lived with it,” Rivers said. “I didn’t realize how big I was. I didn’t feel like that big of a person. I still got out and did what I needed to do.”

But over time, that started to change.

“It got to the point where I was just tired all the time,” Rivers said. “I didn’t do anything. Once I realized how heavy I was, my self-esteem was down so far that I didn’t want to leave the house. I went to work and came home. That’s where I stayed.”

Rivers went to his primary care physician, Dr. Christine Powell, board-certified family medicine physician at UT Health East Texas Physicians in Tyler. He found out he’d developed other medical problems and asked what else he could do to improve his health.

“I was on a strict diet and wasn’t losing any weight,” Rivers said. “I knew I had to do something or I wouldn’t live to see another 20 years. She put me on pharmaceutical diet pills. They worked at first; I’d lose about 20 pounds. Then my body would adjust to them. I’d go back and she’d put me on a different one; I’d lose a little bit of weight and then they’d stop working.”

“I went back in and asked what else we could do,” Rivers said. “She asked if I’d thought about weight-loss surgery. At that point in my life, I’d never had a surgery before, so I was completely against it. Then she let me talk to someone who had it done, and it didn’t seem all that bad. I asked what my options were and we started talking with my insurance to get it approved.”

Rivers was referred to Dr. Hugh Babineau, bariatric surgeon at the UT Health Tyler Bariatric Center. The clinic offers a variety of bariatric surgery procedures and works with patients to decide which is best for them. For Rivers, sleeve gastrectomy was the best option.

“He had severe obesity with a body mass index (BMI) of 46,” Dr. Babineau said. “He also had hypertension, obstructive sleep apnea and pre-diabetes. He was in an appropriate weight range and didn’t have severe acid reflux or a large hiatal hernia. Those are some conditions where a person might not be a candidate for sleeve gastrectomy and should consider gastric bypass insead. It’s also a matter of personal preference sometimes and the decision should be made in consultation with the surgeon.”

“That afternoon after surgery I was up walking around the hospital,” Rivers said. “The next day Dr. Babineau said everything was good to go and released me to go home. Then I started my weight loss journey.”

Now, two years after surgery, Rivers has lost nearly 200 pounds from his starting weight eight years ago. He no longer struggles with type 2 diabetes, sleep apnea or blood pressure problems.

“He’s done very well,” Dr. Babineau said. “He is keeping off more than 100 pounds, and all of his related medical problems have been resolved. He’s been exercising regularly, focusing on good eating habits to keep the calories down and staying on vitamins. The sleeve surgery is backing up his efforts by helping him get full and stay full on small meals.”

For Rivers, the most challenging part of this life-changing journey is controlling his portion sizes.

“Sometimes food still tastes so good and you’ve been looking forward to it all week, but you know you can only eat about five bites of it,” Rivers said. “But I’m OK with that. I know that in four hours, I can go back and get a little bit more. I don’t have to sit here and eat a full plate right now. I can eat it again for lunch tomorrow. Since the surgery, my taste buds have changed, too. Even two years out, I won’t eat a lot of the stuff that causes you to gain weight. I don’t eat potatoes, rice or bread. I eat very little sugar and won’t drink carbonated drinks. I just don’t care for a lot of it anymore.”

Overall, even with the lifestyle changes he had to make, Rivers says having the surgery was absolutely worth it.

“I have the motivation to get up and live life again without being tired all the time,” Rivers said. “The best feeling of accomplishment is not having to order special sized clothes to fit. There’s a big difference between buying 4-5XL and extra large sizes. I’m not ashamed to go out in public anymore.”

Rivers encourages others to take the next step to improve their health.

“If you’ve tried other options to lose weight and it’s just not working, go do blood work,” Rivers said. “Find out where your body’s at, why it’s not reacting the way it’s supposed to and why dieting isn’t working for you.”

When considering bariatric surgery, it’s important to be sure you’re ready to commit to a healthy lifestyle for the rest of your life.

“If you can’t change your life before surgery, you’re not going to be able to handle it after surgery,” Rivers said. You can’t go into surgery and think ‘I’m still going to eat the same garbage I ate before, but now I can only have three or four bites.’”

Rivers’ biggest advice to anyone considering surgery or who recently had bariatric surgery is to set goals.

“Get with your physician and set a goal,” Rivers said. “Don’t set it too high. Set it where it’s achievable. Once you meet your goal, set another one. Do something to help you stay on a monthly, weekly or daily routine. Just know what your goal is.”

Rivers had a great experience with Dr. Babineau and his team at the UT Health Tyler Bariatric Center.

“They are wonderful,” Rivers said. “They’re always polite and have a smile on their face. I absolutely love his nurse, Jennifer [Blakeman]. Anytime I had questions before my surgery, I could just call and she would give her best advice. Dr. Babineau is the most generous man. If you had a question that Jennifer couldn’t quite answer, he’d take the time out to just call and go over it with you to make sure everybody was on the same page.”

Dr. Babineau is proud of the progress Rivers has made since surgery.

“He’s had a real positive attitude all along and really taken advantage of the ‘tool’ that bariatric surgery has given him,” Dr. Babineau said. “It’s very satisfying for me as a physician to see someone like him have all their medical problems go away.”

Now that Rivers has had the surgery, the rest is in his hands.

“I knew after Dr. Babineau was done with surgery that it was up to me,” Rivers said. “I could have the surgery and then just throw the money away and be back to where I was in two, three or four years; or I could learn from my eight years of ‘I don’t want to be like this anymore’ and start my life again. It’s just a tool. Once you have the surgery, it’s up to you. You’re the one in control now.”

For more information or to find out if you’re a candidate for bariatric surgery, visit our website at TylerBariatrics.com or call 903-593-0230.

This story was featured in the August/September issue of Tyler Today Magazine. Click here to view the article.