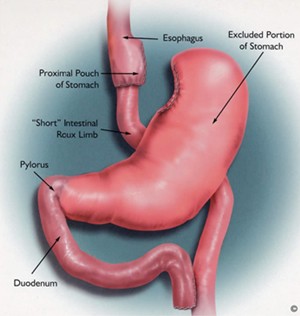 Once the pouch has been created, food comes in at the top, and then leaves the pouch through a small opening called "the stoma," and travels into the intestines where digestion can take place. The juices from the bypassed stomach travel down a different part of the intestines, and ultimately are mixed with the food. No part of the stomach or intestines is removed.

There are four effects: restriction, dumping, reduced appetite and malabsorption. Every individual undergoing gastric bypass experiences different degrees of each effect. All of these effects work together to help a person drastically reduce the calories coming into his or her body.

The small pouch and stoma mean that a person fills up on much less food. For the first few months after surgery, this may be only about a quarter of a cup. As time goes on, people can usually eat about a cup of food.

The intestines are much more sensitive than the stomach, and this can cause unpleasant reactions to certain types of food. Usually, it is high-calorie foods, such as concentrated sugars and fats, that cause problems. Dumping can include nausea, diarrhea, cramping and low blood sugar. It is what helps you stay away from junk food.

There is usually no hunger at all for the first few weeks to months after gastric bypass. Hunger does come back eventually for most people. When it does, the hunger is usually less than before surgery and can be satisfied by much less food. Gastric bypass reduces a “hunger hormone” called ghrelin.

Although rare to do so, a gastric bypass can be reversed.